What an insane day! A massive number of 52 drivers entered into this Soukoukai!

This would be the last time for now running the Bihoku layout on Barbagallo Raceway’s infield before we change to a new course for the next Soukoukai. An extremely fun course due to it’s long run up, constant changes in momentum by accelerating/decelerating as well as changing gradients of turns to really keep drivers alert and pushing themselves by going faster with bigger entries and harder initiations/flicks. This style of course makes it equally as exciting for spectators watching!

It was super impressive to see so many drivers improve throughout the day going through multiple pairs of tyres, but most importantly, having a great time doing so. At Nishi-D, we try to make it as easy as possible to do what you want, whether it be doing tandems or team drift with your friends, solo runs to practice technique, or just being a loose unit by blazing sets and giving a few of these ones! 🤙

As most know, a Soukoukai is predominently a drift practice day, but just to have some fun we hold a small battle tournament towards the end of the day. Drivers are judged in ‘roulette’ style qualifying in the last practice session before the tournament and ranked from 1 to 16 for a traditional elimination tree format. Top 16 winners are decided in solo run knock outs, where each driver performs their best run to reach the top 8, at this point onwards, drivers will partake in tandem battles until the end and a champion is decided!

Most expected previous Soukoukai champions to once again be in the top 4, however, Regan Curtis was knocked out on the top 16 immediately by rookie driver Josh Watkins, partly due to Regan having to switch back into his R32 after driving the 180SX all day, as well as Josh actually just driving super wild. 2 time Soukoukai champion Allister Lyons was dismissed in the tandem top 8 by an in form Jared Marchesani who has been improving his technique all year, and it really showed!

It was great this time round to see completely different names in the top 4. Daniel Silvestro has always been a contender, as well as Liam Gregor, who fought their way through some tough opponents to secure a spot in the finals. Rounding off the battle for 3rd was none other than our guest driver all the way from Osaka, Japan, Ryota Hirakawa in a borrowed RB20 equipped R32 Skyline against Jared Marchesani.

In the end, it was Daniel who came out ontop with his great gliding entries coming out super wide and identical initiations whilst chasing much to the pleasure of everyone watching. Liam stoked to finish in 2nd place, guest driver Ryota in 3rd, and finally Jared in 4th. All the drivers competed against each other in good spirits and in the name of fun, which is what drifting is all about!

To finish off, a big raffle for plenty of prizes ranging from chips, lollies all the way to key chains, stickers and drifting accessories. After the raffles which all participants win something, we move on to the fun but highly contested group game of scissors paper rock! Drivers have a chance to win huge prizes such as steering wheels, oil, tyres, Nishi-D free entry, vouchers, plus many more and lastly the grand prize, a GoPro Hero 7!

We’d like to thank all our sponsors of Nishi-D for continuing to support us and drifting in WA! And a big thank you to all the drivers who came to enjoy drifting with us and ultimately making the day what it is. See you at the next Soukoukai! ✌😁 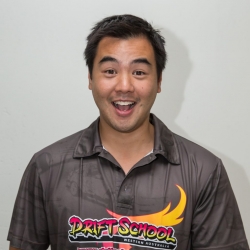 Ken Leong
Owner at Drift School WA
Ken Leong is an experienced drift car driver, instructor and all round enthusiast. As the owner/operator of Drift School WA he is driven by his passion for drift racing. Ken takes immense pride in providing the best knowledge and experiences possible.